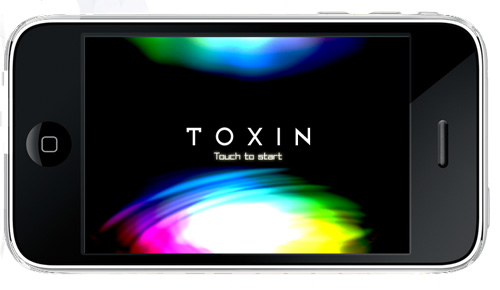 This is the titlescreen of Toxin, my first iPhone game. It was only supposed to be a warm-up; a short project to help me get back into the game after a few years developing web applications, but it has taken much longer than I anticipated.

I’m doing the whole thing myself, code, graphics and sound, largely because I don’t know anyone who could help me out, but also because I was a child in the 80’s, and despite all the developments in gaming that have happened since then, I still have the image of the lone game developer somewhere in the foundations of my mind. I grew up idolizing 8-bit legends like Tony Crowther and Andrew Braybrook, and learned to code in a world where games had authors associated with them. Things have changed, but I still carry all that with me; I just wouldn’t feel like a proper game developer if I didn’t do at least one game on my own.

Oh, and the title screen is animated. It uses a pretty cool effect that I will probably write about soon.