Games and the Imagination

In Games and the Imagination I use Jungian psychology to explore how players imaginatively engage with games. Its main idea is that gamers do not simply identify with playable characters but that the whole game can operate as a kind of dreamscape where all characters, landscapes and situations have the potential to reflect the gamer’s psychological concerns.

I wrote the series in 2002 and used it as part of a portfolio of work I sent around to game companies when I was looking for work. I’m not sure whether anyone I sent it to actually read it, but when I published it on Gamedev.net in 2004 I got a terrific response. I had several working psychologists respond positively, and even a few big names in the games industry wrote to me.

Read it on Gamedev.net

The Yin and Yang of Games: Code and Content

Read it on Gamedev.net: The Yin and Yang of Games: Code and Content

In 2009 all of my gamedev articles were selected for inclusion in the book, Design and Content Creation, which was edited by Drew Sikora and John Hattan. 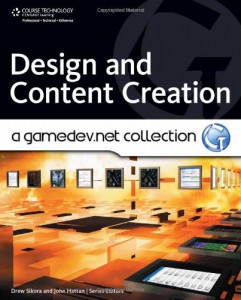