From 2003 to 2005 I was a director and lead developer at Gameonthego Ltd. We were a small company producing mobile games for the Microsoft Windows CE based Orange SPV Smartphone. I was involved in all aspects of development including programming, art and design. All our games were written in C++ using Microsoft Embedded Visual Tools. Starblaster was our first published game.

It is the distant future, and the Earth has finally been destroyed. The remnants of humanity have fled the expanding sun in a great fleet of starships and begun their search for a new home.

Adrift in the vastness of space, the last children of the Earth wandered for a century, until by chance, they discovered a new planet beyond a great asteroid field. As a pilot of the elite Praetorian squadron, your task is to fly ahead of the human fleet and clear a path to their new world.

The colourful backgrounds were inspired by pictures from the Hubble Space Telescope and have a jewel-like glow when viewed on a phone. I wanted to make the game as vivid as possible. The planets in the backgrounds were rendered in the late, lamented BMRT using custom written Renderman shaders. Probably overkill for a mobile game! 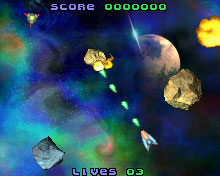 These screenshots are actual size. The SPV had a resolution of 220×170

Unfortunately, time constraints meant there was a lot that had to be left out. There were meant to be astronauts floating around that had to be rescued, several powerups, and crystal asteroids that reflected the background.

Each of the ships was supposed to have a character associated with it. I had the idea that they were supposed to be members of a futuristic space-faring Roman empire. I designed several “futurised” Roman elements including the space helmet below, but in the end we only used the latin ship names. I probably did way too much design work for what was essentially a good-looking but simple shooter on a marginal platform. I guess I wished I was working on a AAA project:) 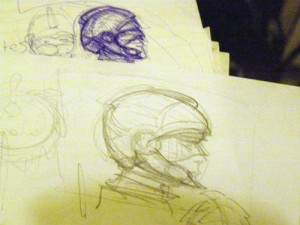