The Gameplay of Exploration 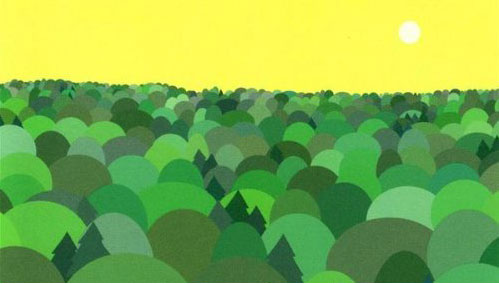 One of the things I love most about video games is their potential for exploration. Like immersion, exploration in games is as much about mood and feeling as it is about the logic of game mechanics. It imparts a watchful, meditative air, a constant openness to emerging possibility that serves as a nice contrast to the intensity and solidity of ordinary gameplay.

This kind of peaceful, yet fully engaged play is something I have always looked for, yet it seems to be a hard thing to find. Too often, explorativity (is that a word? It is now) is simply a side effect of a large game world; there is nothing in the game that acknowledges that exploration takes place. There’s no feedback for anything you do, besides your own satisfaction.

Of course, this lack of feedback may be the entire point. One of the greatest space exploration games, Noctis IV, developed by Alessandro Ghignola from 1996 to 2001, simply presents you with its grainy, expressionistic universe and invites you to explore. 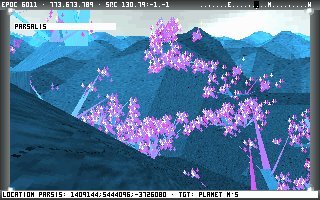 Writing for The Escapist, Philip Scuderi describes Noctis as having an essential “air of tragedy” and loneliness, a sense that there are “no messages to receive or send; no voices to contrast with the endless vacuum.” 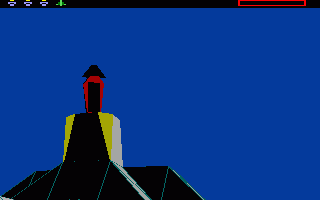 Like The Sentinel, that primordial deity of computer generated worlds, the procedural universe of Noctis presents a blank and pitiless face. Without the presence of meaning within the world, this universe reveals itself to the player as a kind of grand, inhuman unfolding of geometry; a “worldless” world, as Heidegger might say.

Many of the older open-world games like Mercenary, Hunter and Midwinter II have a similar quality of rigorous bleakness which overwhelms the entire game, almost in spite of the developer’s intentions. Hunter, for example is ostensibly a Schwarzenegger-style action adventure, going by the back story and box artwork, but all that is lost in the angular silence of its fractal world.

It is interesting to compare these games with Proteus, which as of this writing, is still in public beta. Like Noctis, Proteus simply places you inside a computer generated world, a beautifully stylised island in this case, and leaves you to explore. In fact Proteus gives you even less to go on than Noctis. There is no backstory, no explanation as to what you might be able to do. You begin the game knowing how to move and sit down, and nothing else.

As your eyes open upon the world you begin to scan the environment. Trees, birds, life, weather patterns weave unnamed and mysterious systems around you. “How do they work?”, “What is my place within them?”, “Who is here?”. Exploration begins.

Proteus avoids the bleakness of other exploration games by filling the world with sound and with significant systems. Everything hums and jangles as you explore; each tree, each type of terrain lends its song to your experience. Animals hop about the forests and react to your approach, the weather changes, seasons pass. Everything seems to effect everything else and you are right in the middle of it trying to figure it all out.

And it gives so little away that you always retain the possibility of being surprised, of something new appearing that casts the whole world in a different light. It takes me back to the days when my friends and I knew so little about games that the most implausible rumours grew up around them. I wouldn’t be surprised to find Sheng Long living in that lonely house on Proteus Island.

For some time now I’ve thought that the mystification of game mechanics, the introduction of other kinds of intelligibility to the hard-edged logics of ordinary games are essential steps in moving game design forward. Proteus is an important step in that direction.

Next time, I am going to write something about space exploration in generative universes, so stay tuned.

*The image at the top of this post is not Proteus! It’s the cover of Palomar II, the 2002 album from NY indie band Palomar. I just thought it evoked the qualities I’ve been talking about in this post. Oh, and I am desperate for a copy of Palomar’s impossible to find first album, so if you can help, please let me know.