When the Kickstarter campaign for Elite: Dangerous was announced, it not only inspired me to write these recent posts on exploration in video games, it made me think back to the hours I spent playing its predecessor, Frontier: Elite II.

Frontier was a magnificent achievement. In 1993 there was no game that could offer similar scale or freeform gameplay. The elegant graphics were also something of an accomplishment since the Amiga and Atari ST were not natural 3d machines. 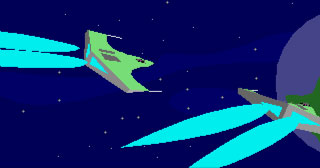 Despite this, I always felt that Frontier never capitalised on the exploration potential of its vast universe.

There was little incentive to leave the inhabited systems and head out into the unknown. You could mine planets, and extract hydrogen from gas giants to fuel your explorations, but these were difficult operations, restricting exploration to very experienced players. 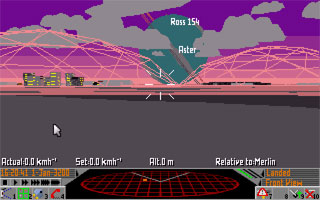 In spite of the rumoured existence of an alien warship hidden in deep space, there simply wasn’t enough mystery out there to entice explorers. The procedural planetary systems of 1993 lacked detail and variety and you could see most of what the game had to offer without going very far at all. None of this really detracted from a game that offered so much, but those of us who longed for the unmarked places on the map were left nursing our imaginations.

So what kind of space exploration game could we make in 2013 with what we now know about procedural world generation? There hasn’t been much information yet on what the procedural worlds of Elite: Dangerous will be like, but we can get an idea of the contemporary state of the art by looking at Space Engine, a procedural universe simulation created by Vladimir Romanyuk. 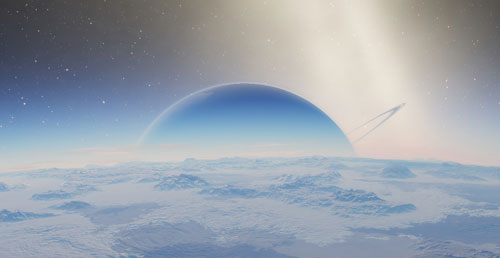 Space Engine was originally inspired by Noctis, the cult freeform space exploration game that I wrote about in my previous post. At the moment it doesn’t really contain any gameplay besides the ability to move around and take screenshots of its graphically impressive universe, but there are plans to create a full game out of it, hopefully remaining faithful to Noctis’ vision of a “dreamable space simulator”.

As you can see from the Space Engine galleries, it is capable of generating varied and detailed landscapes, with plains, craters, mountains, lakes and oceans. Different atmospheric compositions alter the appearance of each alien world. The planetary orbits are physically realistic, and it appears likely that physics that effects the player such as gravity and atmospheric drag are in the pipeline.

All of this procedural detail combines to create a web of systems that can provide gameplay, if they can be given as being of concern for the player.

And because we don’t know exactly what the procedural generators will create, but we do know *what* they create we can set goals for exploration that provide meaningful feedback while remaining open ended.

We can challenge the player to find the tallest mountain, the deepest ocean, the richest ore field, the largest planet that is the closest to its sun. All these goals are specific enough to be put into achievement systems, and yet they remain open. A taller mountain may be discovered tomorrow. Achievements then become, literally, world records. 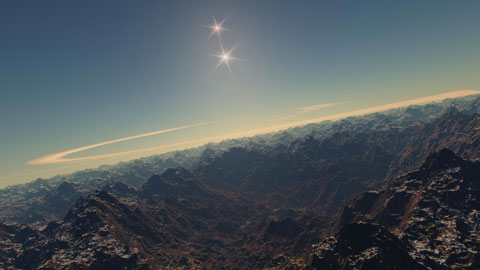 It’s gonna be a rough landing! A Space Engine landscape from the EDGE Review

The technical challenge in this is in creating tools that can scan and interpret the procedural world in order to recognise mountains, ore fields etc. This is the price you have to pay for meaningful feedback; the computer must be made to understand what you mean. The challenge for game designers is to make these knowledge extraction tools fun and interesting for the player to use.

If I were Vladimir Romanyuk, or I had access to his source repository, this is the game I would make with Space Engine.

Imagine an advanced race of spacefarers. War and material gain are irrelevant concepts for them, what they care about is knowledge. When they come of age they set out in lonely ships to traverse the universe. (If you wanted to give the game an end condition you could make it so they were allowed to return home once they had gained enough knowledge. [Perhaps you could even throw them Proteus style into the world with very little contextual knowledge, and make players figure that out by themselves?])

Their ships are equipped with different types of scanning equipment and the means to mine and extract chemicals from planets and asteroids etc. This equipment takes skill to use; for example scanning a mountain formation might involve landing probes in the area surrounding it, in a certain configuration.

The gravity of the planet, the atmospheric composition and the layout of the terrain all effect how easy this is to do. Some planets may be extremely difficult to scan or land on. All this creates gameplay and the potential for informal competition and legendry amongst players.

Perhaps the player flies a living ship, a bit like Moya from Farscape. This living ship grows and develops in response to the knowledge the player can attain from the universe. “knowledge” here is given a more mystical and active significance here than the ordinary intelligibility of human life. 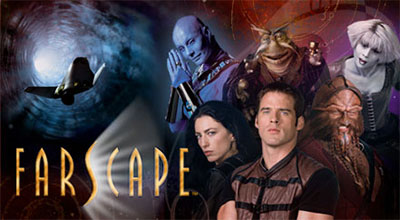 The ship can develop its capabilities using material from the universe in conjunction with knowledge, enabling the player to travel further and do more things.

This creates an economy of progression without requiring any shops or civilisations (less work for the indie developer!) and is in keeping with the wholly alien atmosphere we are trying to evoke.

So there you have it. We’ve now created a basic outline of an exploration game with progression and well defined goals which remains open ended and mysterious. I’d really like to know what you think about these ideas and the thinking behind them. If I had a bit more time and money I’d take a shot at developing it. Maybe in the future. 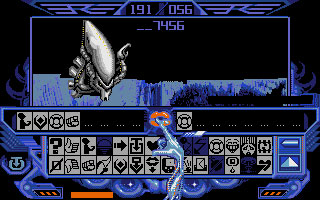